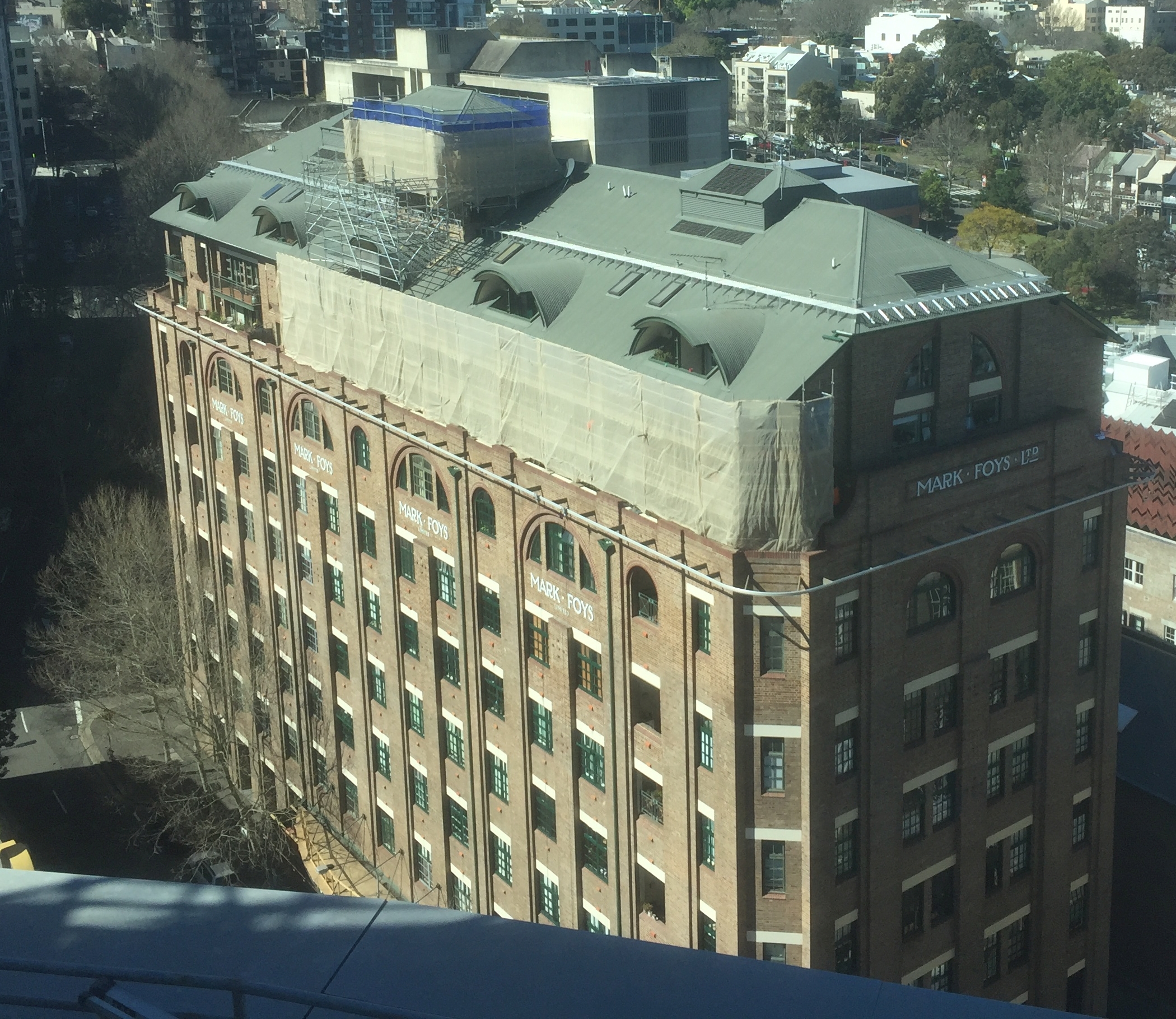 Mr Scaffold recently had a project involving the upper levels and roof sections of the “Sydney Mansions” building at 133 Goulburn Street in Sydney.

The Building was originally a Warehouse for the now defunct Mark Foy’s Department store located nearby on Liverpool Street.  That building is now known as the Downing Centre, housing a complex of state courthouses.  It retains some of the character and charm from its former role with ornate tilework on the façade and surroundings.  The turreted mansard roof has also been retained.

The Goulburn Street Warehouse was originally built circa 1920, and sat vacant after the demise of Mark Foy’s in 1980.  A comprehensive redevelopment of the site was undertaken costing an estimated $27 million.

The original façade was retained and restored, even extended to enclose the top 4 levels of apartments.  In addition to the 115 luxury apartments, 2 levels of basement car parking were excavated during the redevelopment.  Many apartments feature impressive 16 foot ceilings with stunning oversized windows giving views out to Harmony Park.

Conveniently located close to Crown Street, Hyde Park and the city, the building boasts a Spa & Gymnasium, along with an indoor heated lap pool and concierge.

The heritage nature of the building, coupled with the very visible presence in the Southern city area required Mr Scaffold to carefully prepare and execute on not only the scaffold build, but the use of cloth to mask and ameliorate the visual impact of the scaffold on the aesthetics of this iconic landmark.

Stretching across one side of the upper levels, and reaching up to another level that houses required machinery, it was necessary for our teams to be exact in how we erected the scaffold and tied it into the structure.

Special attention was paid to ensuring that the load from the aluminium scaffold was evenly distributed where it was necessary to land on the corrugated iron roofing, particularly where it was curved around the windows and entrances.

Much of the area around where our scaffold was erected had been extended during the redevelopment using specially sourced bricks to match in with the look of the original parts of the building.  This made it imperative for Mr Scaffold to stabilize without severely impacting on the external appearance of the bricks and walls.

Mr Scaffold has teams that are experienced in Heritage and specialized tasks, ensuring your building is protected without impeding the progress of your project timeline.  Give our team a call to see how we can help you.