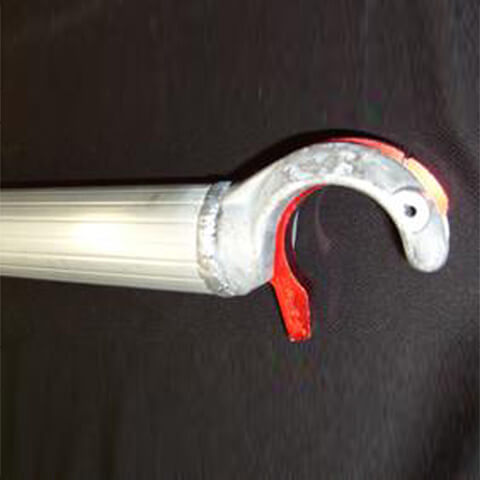 Before manufacturing, an engineer will draft out the specifications of the scaffolding components.

Decisions on materials, manufacturing methods, purpose of design, and specifications of the finished products will all be taken into consideration at the initial stages.

Once a plan for the scaffolding system has been adopted, generally, an engineer will use software such as CAD to draw a 3D simulation of the completed tower.

Using other software and engineering principles, the engineer will carry out stress testing to analyse the initial design. Obviously a process of improvement will generally follow before engineer design approval and progression to manufacturing.

Tooling is the process where jigs, extrusion moulds, casting moulds, welding techniques and a whole raft of other infastrucutre and practices
will have to be built, tested and implemented.

Then of course is the manufacturing. Manufacturing of the products can take many different shapes, and is commonly done in China at the moment, where labour intensive practices are cheaper. Once manufacturing (and then possibly shipping / transport etc) is complete, a process of certification must begin.

We have referred earlier to the Australian and New Zealand Standards (AS/NZ 1574), which is the protocol set down by the Federal and State Governments as the accepted principles of quality assurance for scaffolding systems and scaffold related products, such as couplers etc.

An engineer will set down a Testing Protocol for the regime of different tests that are required to satisfy the Standards.

The most common tests that are involved for scaffoldings are Stiffness Test, Load Bearing Tests, Structural Integrity Tests, Stability Tests. The different tests will be executed, recorded and reported.

Based on the required Standards, in Australia, it is the position of the engineer to clearly mark each test as Pass or Fail. Satisfaction of the Standards and protocol will generally lead to a pass classification by the engineer.

In different jurisdictions, the process for Design Registration is slightly different. In NSW, the ruling government is WorkCover NSW, and scaffolding systems must be registered by attaining a Certificate of Plant Design and Registration.

A small fee is payable to attain Design Registration. The relevant supporting documents of testing must accompany any application, in which WorkCover NSW will process, review and make ultimate ruling for the allocation of Plant Design Registration for a scaffolding system.

The WorkCover NSW, and also the WorkSafe agencies from other states, will include a Plant Design Registration number and a Duty Ranking, as well as a height limitation.

Plant Design Registration is supposed to be provided by the seller of any scaffold system, be in Aluminium Scaffoldings, Fibreglass Scaffoldings, and / or Steel Scaffoldings.