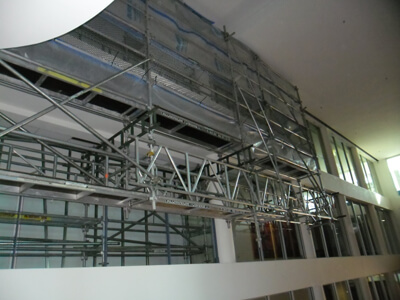 Not a particularly large job, but a bit more technical in nature to start off our Project of the Month January 2013!

A large commercial premises in the CBD needed access to it’s ceiling so the job was required to be done after hours, and had to be fully erected between midday on Saturday and 6pm on the Sunday night.

The difficulty was the ceiling was around 30m above the foyer which had very large obstructions and a design that means any kind of lifting equipment or boom was impossible.

This means the only way to gain access was by building scaffolding and using a suspended platform.

Building a base structure and cantilevering is nothing new in scaffolding, but the limited area to base and tie in, meant we had to cantilever on a cantilever. Not for the faint hearted or inexperienced – that’s for sure

But Mr. Scaffold’s very skilled and professional crew got it done with a minimum of fuss – under time as usual.

We were able to build the scaffold over one weekend, and dismantle the very next weekend.  See our Scaffolding FAQ for more information on scaffolds.

Great effort guys. Particular mentions to Scott Micallef, our founder and Head Estimator who liaised with the client, our engineers and crew to ensure the job ran smoothly!