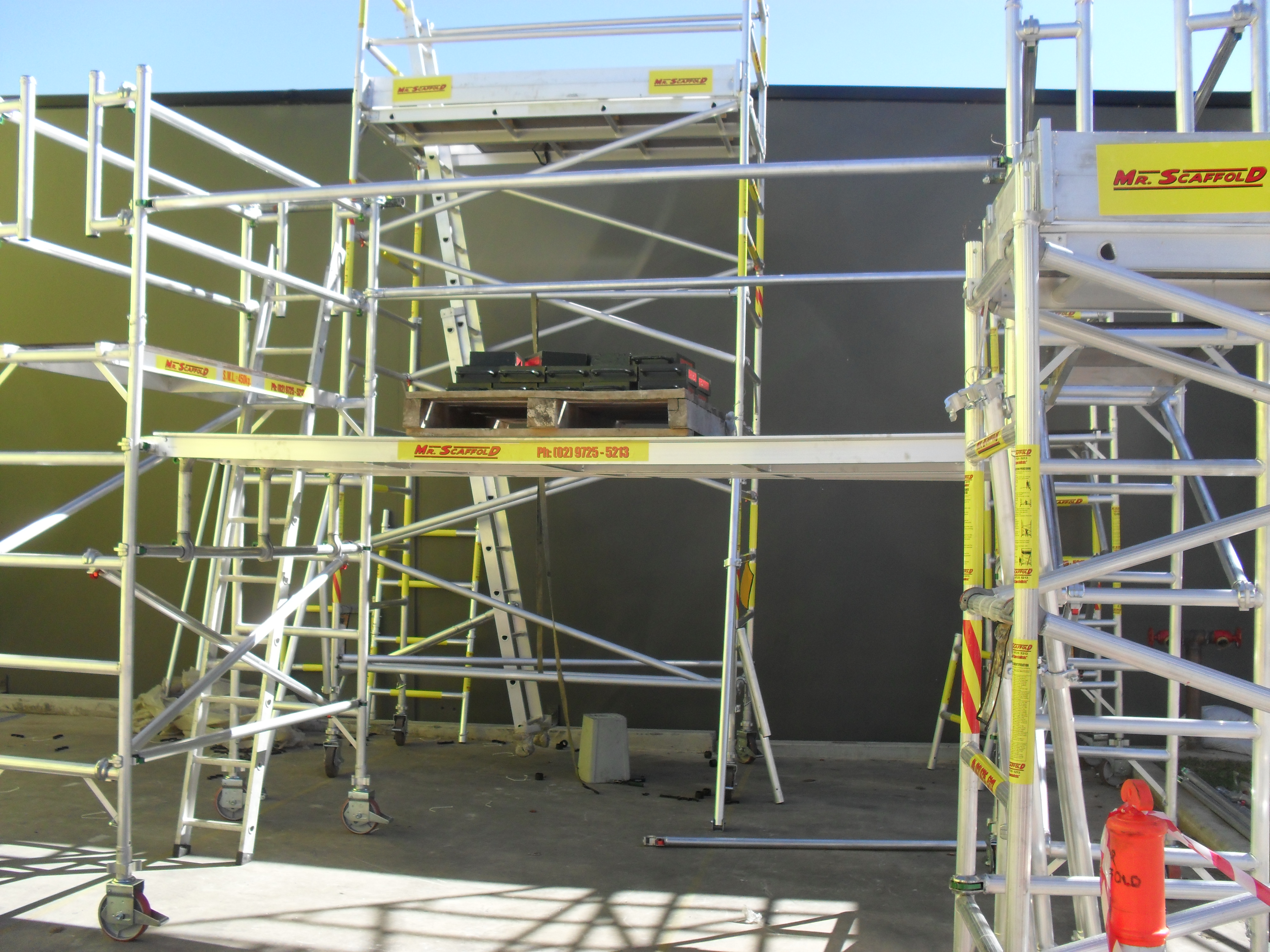 Aluminium scaffold is an incredibly versatile product that can meet many of the access needs that arise across Commercial, Industrial and Residential properties.  It is favoured in applications where the weight of the scaffold becomes a consideration (Maritime, rooftops, balconies, warships etc.)

The rating of scaffolding has been covered previously, however the methods and activities that make up the testing of Mr. Scaffolds brands of aluminium scaffold have not yet been discussed on these pages.

Mr. Scaffolds range of aluminium scaffolds are designed and manufactured to meet and in most cases exceed Australian Standards.  To verify these conditions, and prove our claims, Mr Scaffold has had our scaffolding range tested by independent authorities.

Over a Decade ago, we started getting tests done on our scaffold range, and where re-testing was necessary as the designs were altered to meet Australian conditions and use it was undertaken.

The term “Testing” is a little broad, so we will look at what was actually done to the randomly selected test scaffolds.

Mr. Scaffolds brands are covered by the Australian Standard AS/NZS 1576 on scaffolding.  AS/NZS 1576.3:1995 Scaffolding Part 3: Prefabricated and tube and coupler scaffolding. describes the exact methods and requirements for testing,

The first test, “Stiffness test on assembled freestanding scaffold” involves putting an outward pressure of 250N (equivalent to 25.5kg) for 15 minutes and measure the deflection (bend) on all four sides.  A properly constructed scaffold will disperse this force through the various components, whether they are ledgers, transoms and bracing, or in the case of mobile scaffolds, frames, horizontal braces and diagonal braces.  This outward force is applied at a height that matches one of the working heights for the scaffold.  In the picture, the force is being applied at a height of 6 metres, though for our FOLDSCAF unit, this was applied at 2 metres.

“Vertical Test” is a fairly simple test where loads are applied simultaneously to the vertical standards (or frames) of the scaffold for a period of 15 minutes, and then inspect the scaffold for any sign of failure or permanent deformation.  These loads are substantial, on a SUPASCAF mobile scaffold that is rated for 450Kg, the load used was 1.5 tonne.

“Load bearing scaffold test” is similar to the “Vertical Test” but in this instance the weight is directly supported by one transom (or horizontal frame tube).  The testing authority will select whichever looks to be the weakest (on mobile scaffolds, usually the one without welded bracing) and apply a force that is described by the formulas in the Standards Appendix.  Once again, the weight is substantial, our SUPASCAF mobile was subjected to over 1000Kg being suspended from a single horizontal frame tube.

“Prefabricate Platform Unit Test” is actually two tests, one that places a load on an area 100mm square at 50mm from the edge of the centre of the platform.  For our FOLDSCAF platform, which was actually tested for Medium duty rating, this meant 150Kg of weight sitting midspan for 15 minutes.  The second part of the test is then a load being applied to the middle third of the platform for 15 minutes.  Again, with our FOLDSCAF platform, this meant a massive 900Kg sitting on the Mini-Scaffold.

All of the Mr Scaffold range of aluminium scaffolds have been tested, and if you wish to have a copy of the reports, they are available upon request.

Mr Scaffold takes great pride in the strength and durability of our scaffold, and despite the mention in this article of our scaffolds withstanding weights over and above those for which they have been rated, we highly recommend that you ensure that your scaffold is never overloaded or subjected to forces beyond those set out as the Safe Working Load SWL for each product.