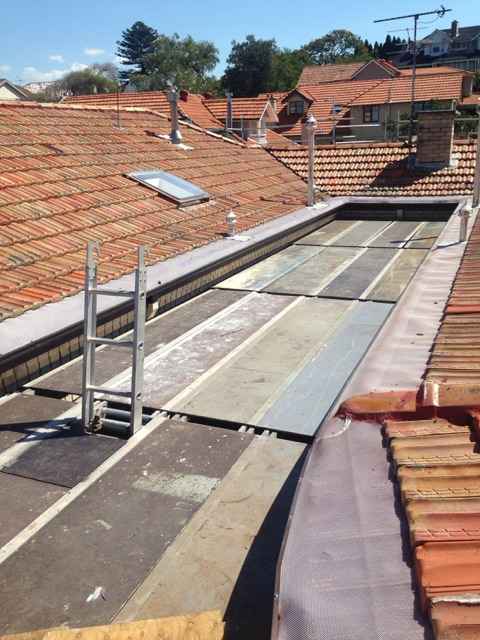 The featured project this week is an apartment block in the Sydney suburb of Mosman. Originally inhabited by the Borogegal tribe, this well known suburb is adjacent to the harbour, and is also home to the main Zoo for Sydney, Taronga Park. Mosman boasts residences that date back to as early as the 1830’s, and alsom some of the most magnificent views of both Sydney Harbour and Middle Harbour.  Since the late 19th century, Mosman was known as “Australia’s most painted suburb” and it still present many features and sites that would inspire artists.

The block itself is a U shape, with the ends pointing towards the south, and each wing rounded at the end.  The cleft between the wings runs 10-12 metres deep, and only 2.5 metres wide.

The project was to provide a working platform for roofing works. Additionally platforms and guardrails were added to provide working levels to access the area around the large windows at the end of each wing. You can see in some of the pictures, that the guardrails extend well above the normal double handrails on the top roofing levels. This extension is for the added safety of any worker who is standing on the higher surface of the roof itself.

The scaffold varies in width greatly around the building, with the cleft being filled with platforms to provide a suitable working area, and most of the circumference being serviced by a single width.  On the Eastern side however, an existing stairwell and door access adjacent to the chimney block that juts from the even line of the wall required the scaffold to be erected as a double width to move the standards out far enough to both provide clear access, and find suitable landing points for the jacks.

Where the twists and turns of the buff coloured bricks require a different angle to follow the contours, the bay is securely tied into the other bays, and tied into the structure itself.  It is noticeable on one photo where the scaffold jumps past the front entrance, the team have used ledgers to reach across the space and tie in both sides of the scaffold.

Sections of the scaffold were shrouded in shadecloth to present a slightly less jarring aesthetic, but one of our team managed to get down to the rear of the property and see what the resident pink flamingos thought of our work!